Background: Glioblastoma multiforme (GBM) is a belligerent brain tumor constituting about 67% of primary brain tumours. The current therapy for glioblastoma multiforme is surgery, radiations and chemotherapy though the success rate is quite limited. Azacitidine is a hydrophilic anti-cancer agent which acts by demethylation and is used in the treatment of both acute and chronic myelomonocytic leukaemia along with GBM.

Methods: Preparation of Azacitidine loaded PLGA nanoparticles was done by double emulsion (w/o/w) solvent evaporation technique. PLGA was used in the formulation, as it is biocompatible and biodegradable. Polyvinyl alcohol worked as an emulsifier while Span 80 decreased the interfacial tension among two immiscible phases (aqueous and organic), resulting in increased stability of the formulation.

Results: Polymer concentration was directly proportional to the entrapment and drug loading and inversely proportional to particle size. Azacitidine loaded PLGA NPs showed a biphasic release model. At the first stage, burst release was observed, followed by sustained release. About 43.93 ± 0.69% drug was released in 1 hour and the remaining drug was released in 48 hours. 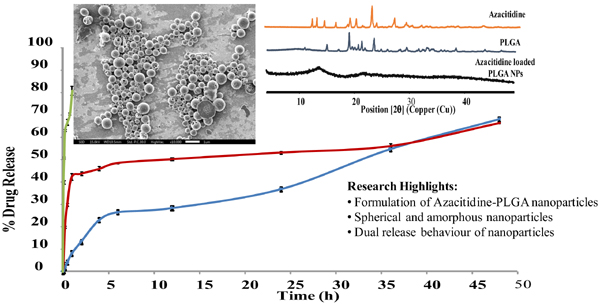