Introduction: Ropinirole (RP), is a selective dopamine agonist that is used alone or with other medications to treat the symptoms of Parkinson’s disease (PD). RP has low bioavailability of only about 50% due to the first-pass metabolism, and it requires frequent dosing during oral administration.

Aim: The objective of the current research was to develop RP-loaded solid lipid nanoparticles (RP- SLNs), nanostructured lipid carriers (RP-NLCs), and their corresponding hydrogels (RP-SLN-C and RP-NLC-C) that could enhance RP therapeutic outcomes during PD treatment.

Results: The optimized RP-SLN formulation showed particle size and entrapment efficiency of 213.5±3.8 nm and 77.9±3.1% compared to 190.6±3.7 nm and 85.7±1.7% for optimized RP-NLC formulation. PXRD supplemented and confirmed DSC results, RP was entrapped in a molecularly dispersed state inside the core of the lipid nanocarrier. Furthermore, RP-loaded lipid nanocarriers revealed a spherical shape in SEM images. In vitro release studies demonstrated sustained release profiles for RP from SLNs, NLCs, and their hydrogels over 24 h. Optimized SLN, NLC, and nanocarrier- loaded hydrogel formulations were stable over three months at 4ºC and 25ºC storage conditions.

Conclusion: Overall, the results demonstrated that lipid nanocarriers and their corresponding hydrogel formulations can be considered as a topical drug delivery vehicle for RP during the treatment of PD. 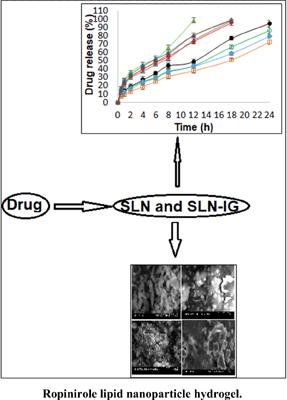